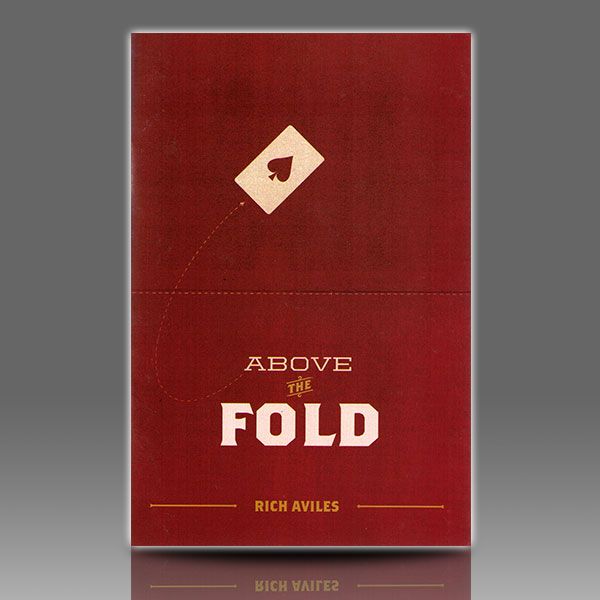 Above the Fold by Rich Aviles and Vanishing Inc. Magic

Beschreibung Bewertungen 0
Beschreibung
From the foreword by Daniel Garcia: "Some of the most clever, modern card thinking I have ever... mehr
Menü schließen

From the foreword by Daniel Garcia: "Some of the most clever, modern card thinking I have ever seen."

Published by Vanishing Inc. Magic, Above the Fold is the debut collection from one of magic's most exciting new talents: Rich Aviles. In this intelligent, praiseworthy collection of card and close-up material, Aviles details thirteen effects and seven moves, each one explained with equal parts clarity and wit.

We have had enormous success with publishing SMALL BUT POTENT magic books-we like to present only the strongest material of a clever magic thinker. Every single trick is worth reading, practicing, and performing. Here are some highlights:

Fax Machine: A card animates, moving on its own power, and changes into another card as it moves through the deck. It's kind of like an ungimmicked rising card effect ex- cept... a card doesn't rise.
Ballerina Change: With a flourish, the top card is extended away from the deck. A wave of the hand and it changes into a different card. It only lasts a couple seconds, though, until it visibly changes back to the first card without any cover.
Pocket Protectors: This trick is extremely rare in that it will completely fool magician audiences and entertain non-magicians! This is the best trick construction we've seen in a long time!
Bystander: Adhering to the strict rules of the International Brotherhood of Magic People, the magician is forced to take a break from performing. In the meantime, the deck is handed over to a spectator who unwittingly does the impossible. The magician then discloses that he predicted the spectator's every move.
"Above the Fold is refreshing-a collection that demonstrates real ingenuity and a DIFFERENT approach to card magic. I enjoyed every page and trick."
Joshua Jay

"I've known Rich and his work for years, and am so pleased he is finally releasing his material. Everyone is going to love Above the Fold."
- Joel Givens