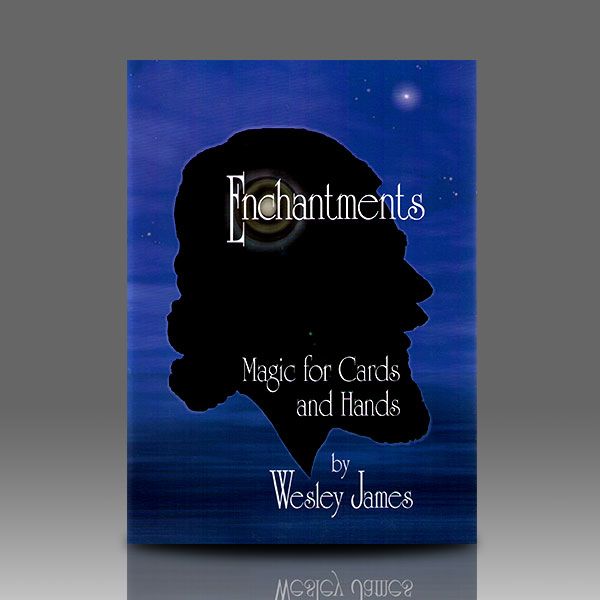 Enchantments - Magic for Cards and Hands - by Wesley James

Beschreibung Bewertungen 0
Beschreibung
With Wesley James´s Enchantments you will find yourself confronting one of the largest... mehr
Menü schließen

With Wesley James´s Enchantments you will find yourself confronting one of the largest volumes of original card magic ever conceived by one man--500 pages of shrewd and sophisticated material by a modern creator and performer who has repeatedly shown his ability to make important and lasting contributions to the field.

Wesley James has been a palpable presence for many years on the cutting edge of New York City´s card scene and magic underground. During more than fifty years in magic, twenty-five as a full-time professional, he performed nearly every variety of magic from close-up to illusions, from kid shows to corporate parties, and everything between. For many years he refused to lecture for magicians, reserving his original material to enable him to earn his living. Now retired, he shares his professional secrets freely.

Enchantments is an important testament to Mr. James´s devotion, cunning and expertise in a world in which he rubbed shoulders and traded thoughts with the twentieth century´s finest cardmen, from Vernon to Marlo, from Krenzel to Dingle. These personal involvements, amplified by a thorough study of the literature of card magic, have produced a body of work rare in the quality of its thought and innovation.

Enchantments collects and presents in illuminating detail the fruits of Wesley James´s intense involvement with the invention and perfection of card magic from the 1960´s right up to yesterday. Within the covers of this volume you will find fresh plots playing neighbor to new presentations and combinations of past classics and overlooked gems. You will find effects with Aces and packets, presentations of visual magic and mental magic; and you will find a wealth of new sleights and tools, with far-reaching possibilities for application, including in-depth studies of false shuffles and deals, multiple lifts, passes and palming.

Enchantments is a milestone from one of card magic´s most innovative and persistent thinkers. Its contents benefit from a rare combination of technical knowledge and performing experience. To read this book is to share with Mr. James in a breadth of thought, a depth of understanding and an enchantment in the presentation of quality card magic!