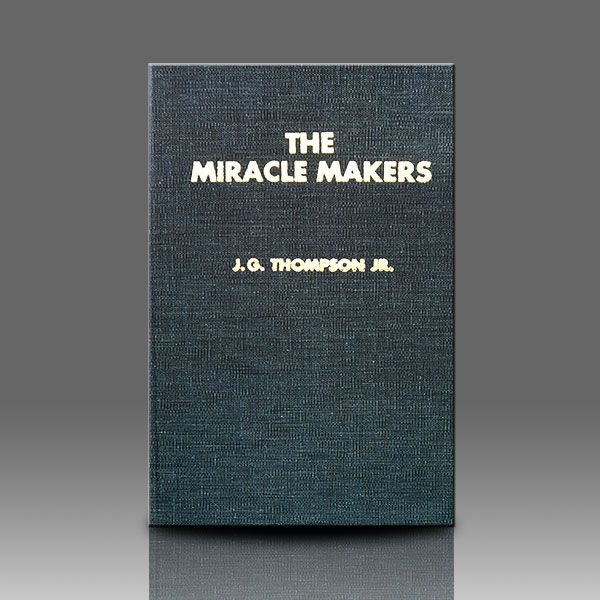 Beschreibung Bewertungen 0
Beschreibung
Originals now available! Long out of print, Miracle Makers by JG Thompson has been off the... mehr
Menü schließen

Originals now available! Long out of print, Miracle Makers by JG Thompson has been off the market for at least 10 years. Copies found recently in a California warehouse were preserved in retail condition and are now available to magicians!

The Miracle Makers, Some Boulevards to Enchantment, features illustrations by Ned Rutledge and Harry G. Franke, beautifully bound in hardback. The author, JG Thompson, won the legendary IBM Gold Medal in 1955 with Presto, a trick right from the pages of this book!

• Hardbound with gilt stamping!
• Over 300 pages featuring 139 photos!
• Historic introduction by Karl Fulves!
• Long out of print, sought after material!

Mental Echo, one of the greatest mentalism routines EVER, is discussed at length in an entire section devoted to the famous concept. Also included is the amazing newspaper prediction, Before the Presses Roll, one of the main reasons magicians buy Between Two Minds.

JG Thompson is a noted author, having worked on many books with Anneman, Bobo, Booth, Fitzkee, Gardner, Gibson, Hugard, Lorraine, Osborne, Tarbell, Rutledge and many others. Get this piece of magic history before they are all sold out!

Mike Caveney says, "There is a lot of great magic in this book."

Thomas Harris says, "Mental Echo is a beautiful, beautiful thing! I think this is one of the greatest routines in mentalism, maybe at the very apex."

Ned Rutledge says, "Mental Echo is a majestic and sophisticated blend of subtle principles. You have a symphony here. Reluctantly, I must admit there's nothing in it I can improve!"